DIRECTIONS for THE RESTORATION GAME

OBJECTIVE: Be the first player to perform all 3 actions of at least 1 restoration technique to 3 habitats AND supplement them with 3 plant species.

BACKGROUND INFORMATION: This game was created in part to introduce people to the marvelous diversity of plants in nature.  Plants are often viewed as just green things and because of this, they are often ignored.  This game seeks to inspire people to learn about the vegetation present at a variety of habitats, to teach people that different plants grow in different areas, and give people a fun and interactive activity to do following their stewardship activities in the field.  The laminated cards are durable and water resistant.

HABITAT CARDS:  The game is loosely designed around the plant communities of the Chicago Region and contains several habitats unique to that area.  However, it includes many plants and habitats that are applicable to a number of physiographic regions in the Midwest.

There are 18 habitat cards, each representing a natural community in the Chicago Region: 4 forest types, 1 savanna, 2 coastal lake plain, 5 wetland types, and 6 prairie types, listed below.

Image on the back of habitat cards is of the Gravel Prairie at Shoe Factory Road Prairie in Cook County.

ACTION CARDS:  There are 3 restoration techniques that can be applied to each players’ habitats: herbicide treatment, prescribed fire, and tree and shrub removal.  Each restoration technique is further divided into 3 management actions: training, equipment, and a volunteer.

PLANT CARDS:  Each plant card contains the family for the species and a C value, which is the coefficient of conservatism.  C values close to 0 represent species that occupy badly damaged habitats, whereas species closer to 10 only occur in natural quality natural remnants. The family names and C values are not directly involved in the game play, but instead are provided as an educational reference.  In general, plants with C values closer to 10 are considered “way cool.”

Image on the back of plant cards is of the Kankakee Mallow (Iliamna remota).

SETUP: All cards are labeled and color coded in order to make it easy for anyone to play.  There are three types of cards: Habitat cards are blue, Action cards are red, and Plant cards are green.  Extensively shuffle all the game cards according to color.

To make the game go more quickly, remove the plant cards belonging to the habitats that were not drawn by any players.  And/or remove all the management action consequence cards for a less strategic, but friendlier game.  See below for an alternate way to play the game.

The player whose birthday is closest to Charles Darwin’s (February 12) goes first.

Each turn starts by playing or discarding an action card.  If the action card is a management action, place it above one of your habitat cards to show the restoration technique being performed on that habitat (Figure 1.).  If you wish to play a consequence card against another player, the opponent’s management action card is discarded, along with the consequence card.  If you wish to play a wild card, place it to the side of your habitat cards and it remains in play until it is removed by another player.  After playing one action card, replace it by taking an action card from the draw pile and putting it in your hand.  You should always have 5 action cards in your hand.  Next, draw a plant card.  If the species fits one of your habitats place it below the associated habitat card.  If not, put it in a separate discard pile.  This completes one turn.

If a plant card is discarded at the end of a player’s turn, and another player wants it, then they can discard one of their management action cards that is in play and take the discarded plant card and add it to their matching habitat.  This also forfeits their turn.  In a multi-player game, anyone can take a discarded plant card, but the option is available first to the person to the left of the active player, then the next player and so on.  Even if a person who takes the plant card is not next, they still lose their turn.  Discarded action cards cannot be obtained in any way.

Each turn is consists of any 2 of the following moves: move your marker from card to card, play a plant card, or draw a plant card.  Earn points by playing a plant card while your marker is placed on the corresponding habitat.  This means you observed that plant in that habitat.  Place it aside faceup for all to see.  The object of the game is to observe one plant species in each community class (prairie, wetland, forest, savanna, coastal plain) and score the most points.   Once a player has observed a plant in each community class, each other player gets one more turn and then the game ends.  Add up the C values on the plant cards played during game play for each player and the winner is the player with the highest score.  Note:  It is possible to force the end of the game by observing a plant in each community class and still lose.  This is why the plant cards observed are placed faceup so each player can see how many points each other player has.

All photos copyright © Christopher David Benda except the photo on the fire expert card is courtesy of Jesse Riechman. 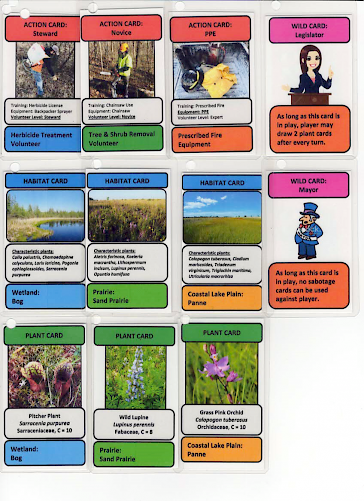 Contact botanizer@gmail.com for questions/suggestions regarding the instructions for this game.